What Attracts Stink Bugs to Your Home?

So, what causes stink bugs? There are numerous components that contribute to their presence, but some of the primary causes are:

Brown marmorated stink bugs (BMSBs) are native to China, Japan, Korea, and Taiwan. They were unintentionally introduced into the United States, with the first specimen being collected in Pennsylvania in 1998.

Predators and other population control organisms are beginning to be discovered and experimented with to determine their capability of naturally controlling stink bugs.

Stink bugs are not only serious agricultural pests of soybeans and corn but also many fruit and vegetables such as apples, apricots, pears, cherries, grapes, lima beans, peaches, peppers and tomatoes.

They are also known to feed on ornamental plants that grow close to homes and other buildings.

In late summer and early fall, shorter days and decreasing temperatures cause stink bugs to seek shelter for diapause, a period in their life cycle where they are inactive.

When stink bugs locate a suitable location, they release an aggregation pheromone that attracts other stink bugs to the site.

During their overwintering phase, they do not feed and do not reproduce. In fact, females are incapable of reproducing until early spring.

Although overwintering stink bugs can be a major nuisance, they do not damage structures, eat fabrics, or consume foods stored inside the home.

Stink bugs gain entry into structures through cracks, crevices, gaps and holes in foundations, window and door frames, soffits, attics, and underneath siding.

Overwintering populations are particularly large in structures that are located close to agricultural fields, fruit orchards, large gardens, and other places where infested ornamental shrubs and trees that attract stink bugs reside.

Exclusion is the first step in keeping stink bugs out of a structure. Sealing around windows, door frames, under wooden fascia boards, siding, pipes, and around water spigots is a must.

Tight-fitting screens with no holes will reduce the likelihood of the bugs entering through roof vents. If you have a fireplace, closing the flu when not in use is another good way to exclude bugs from the inside of the home.

If stink bugs happen to make it inside, it is best to remove them with a vacuum. If you have a small population indoors, simply removing them with a tissue or paper towel and placing them in an outdoor receptacle will suffice. 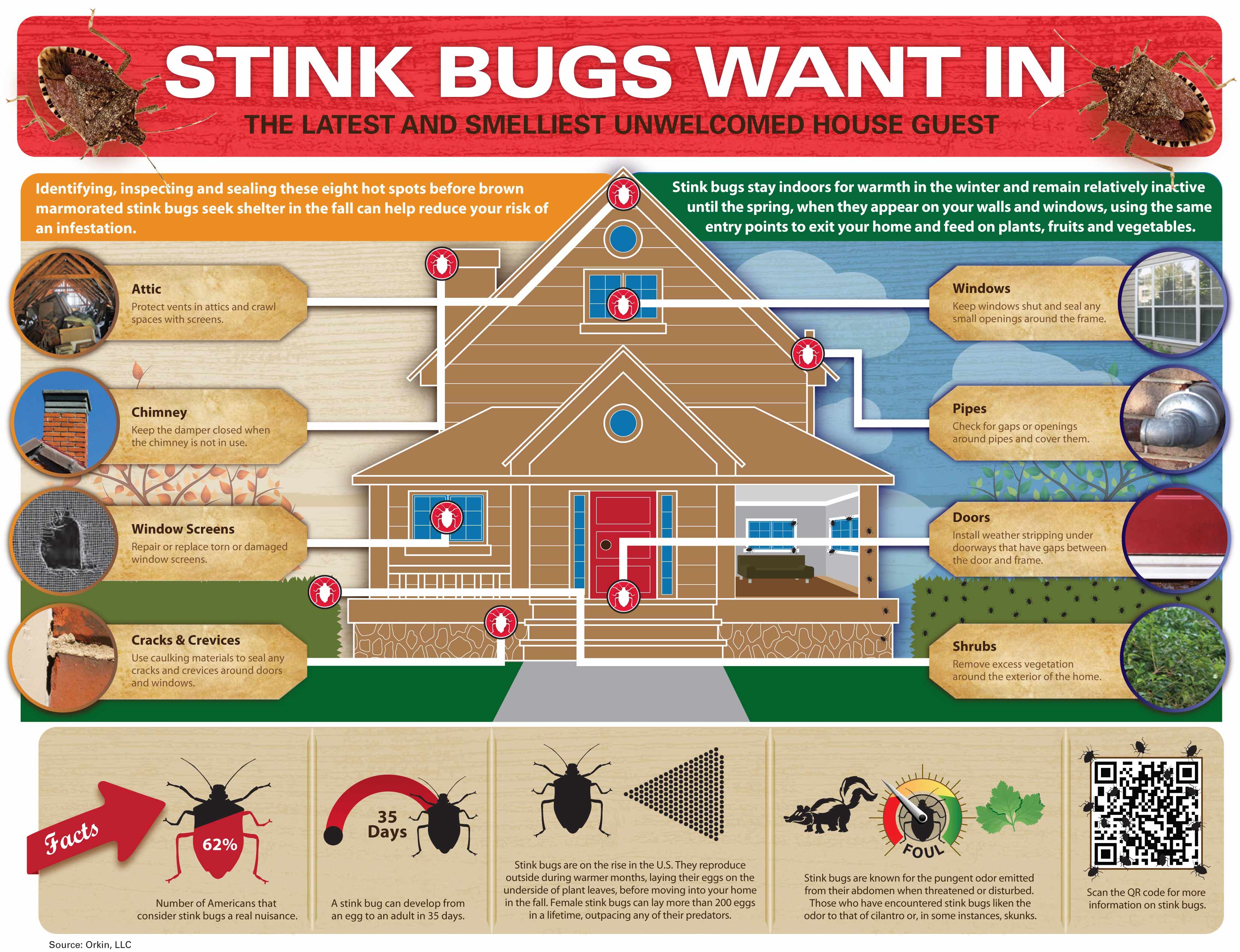 Home and building owners often attempt to get rid of stink bug populations on their own before they decide to contact a pest management professional. Contacting a professional in advance could help save time, money, labor, and aggravation.

If you're experiencing issues with removing BMSBs from your property, contact your local Orkin branch to request a free inspection. Orkin will assess your pest problem and provide a science-based solution to combat your pest issues.