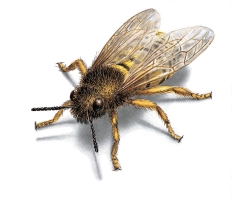 How to Identify Types of Bees

How Did I Get Bees?

Bees sometimes make their way into homes while looking for a place to nest. The insects prefer dark and protected areas, so wall voids or chimneys often fit their needs. Any living space exposed to the outside is at risk for bee infestations. Some species that nest in wall voids fly inside the living space through baseboards, electrical outlets, and cracks in walls.

How Serious Are Bees?

While bees can benefit the environment in many ways, it is inconvenient and possibly dangerous to let a bee hive thrive near your home. In general, bees only sting to protect themselves or defend a nest. Most stings are only mildly painful, but some people may have an allergic reaction.

Hives filled with honey inside wall voids may ferment over time. This can:

How Do I Get Rid of Bees?

It is important to properly identify the particular species living near your home, as bees are often mistaken for wasps, each requiring unique treatment methods.

It is also necessary to know effective application strategies, as well as the limitations and dangers associated with each method. In many regions, special licenses are required to treat infestations.

The only way to rid a home of bees is to remove the hive entirely. For safety and efficiency purposes, contact your local pest management professional for help with bee control.

While some bees are solitary, species such as honey bees and bumble bees are tremendously social. Bee colonies are comprised of three castes: the queen bee, infertile female worker bees, and male drones.

The queen mates and lays eggs for the span of her life. Honey bee queens can live up to five years, though most average a lifespan of two to three years. Male drones exist solely to fertilize the queen and die soon after having fulfilled their task. Female worker bees perform a multitude of tasks necessary to the survival of the hive. As a result of their constant laboring, their average lifespan is usually a mere six weeks.

Flowers and flourishing vegetation often attract these insects, and there is no insect as important as the bee when it comes to pollination. All bees are hairy, a crucial trait for pollen collection.

Many female bee species have rows of bristles on their hind legs which form a hollow basket. When the bee lands on a flower, pollen grains are combed into the hollow basket and bristles. Cross-pollination occurs when the displaced grains of pollen are distributed to the fertile pistils of other flowers as the bee alights upon them.

Although only females are able to transfer pollen, all bees are able to sip the nectar from flowers using a tongue-like organ. This nectar is their primary source of energy. Pollen is sustenance for both adult and larval bees, as it contains protein and other nutrients necessary to their survival. Bees possess an organ that converts nectar into honey, which is collected, depending on the species, inside the hive or bee colony.

The most well-documented and encountered bee swarms are those of honey bees. Typically, honey bee swarms are not a major threat, unless when dealing with Africanized honey bees. The bees do not have a nest or young and, therefore, are less defensive. But, they will sting if provoked.

Why Do Bees Swarm?

Bee swarming typically occurs in colonies that are thriving and with robust populations. Weak colonies may not swarm until they become stronger and larger in population. Starvation, disease, or failing queens are common factors that make a colony weak. Seasonal changes and overcrowding a just a couple reasons swarms occur.

Swarming involves a contingent of workers and a queen departing the original colony. The swarm typically gathers at a resting site, often in a tree, after leaving the colony. Scouts are sent to locate a new location, such as in a log or other cavity. Once a suitable location is found, the swarm will move to the site and begin to nest.

Two kinds of bee swarms occur: primary and secondary. The queen bees lead primary swarms, which include a larger number of workers acting to protect the egg-laying queen. Secondary swarms are led by several virgin female bees and as a result, these swarms are half the size of the primary swarm and do not occur as often.