What do Soldier Termites do in a Termite Colony?

Termites are social insects and live in colonies comprised of different castes. Although they vary slightly between species, there are typically three castes in a termite colony. These three castes all work to ensure the ultimate survival of the colony. Of the three castes, soldier termites are responsible for the protection of their colony.

Soldier termites have distinctively shaped heads and are typically bigger than workers. Their protruding mandibles help them protect their colonies. Soldiers have elongated bodies and are pale red, light brown, or white. 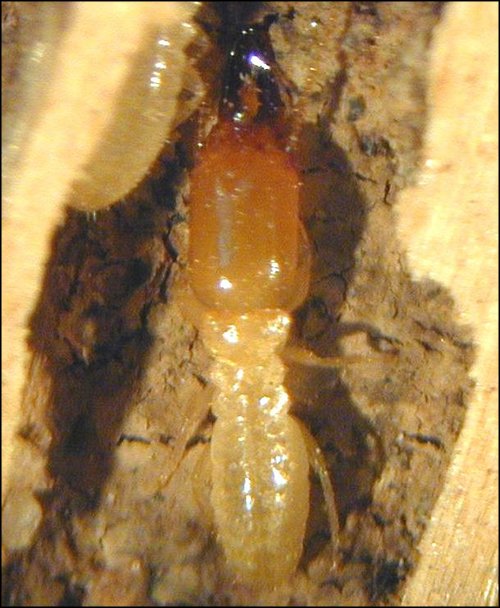 Role of the Soldier Termite

Within these termite castes, the soldier is responsible for defending the nest. A termite's main enemy is an ant. Considering soldiers' large heads and mandibles, they are well equipped to battle insects (typically ants) that invade the colony. An alarm pheromone can signal such an invasion and bring soldiers to the site of the attack. However, native subterranean termite soldiers make up only about two percent of the colony's members, so they can be easily overwhelmed if the ants come in large numbers. In some species, termite soldiers have a tube-like projection (called a fontanelle) that contains a sticky substance that entraps their enemies. Another responsibility for soldiers is to use their oversized and hardened heads to plug holes in the mud tubes that extend from the soil to a food source above ground. These breaches in the tube walls will quickly be patched by workers.

There also are some more subtle roles for soldiers - as organizers. A group of workers isolated in the top of a test tube, and separated from food (wood) by an inch or two of soil, do not tunnel to the wood unless there is at least one solder in the group.

Soldier termites rely on worker termites to feed them. Soldiers cannot feed themselves because their large mandibles (jaws) prevent them from biting wood or other cellulose materials.

Soldier termites most often bite when attacking other pests, such as ants who invade their colonies. Though uncommon, soldiers will bite humans if they're handled. Termite bites cause very minor irritation or pain, but are not known to spread disease.

Termites develop from eggs to larvae (nymphs), and then finally adults. Nymphs go through a series of molts as they grow into workers, soldiers, or alates. This process may take months, and adults live between one and two years.

While soldier termites don't consume wood, they protect the workers that do. These pests communicate danger to the colony by banging their heads against tunnel walls and creating vibrations. They also assist workers in repairing tunnels and building new ones.