What Time of Year Do Termites Appear and for How Long?

Many people think prime termite season is when termites appear in swarms. However, termites that have infested a house can cause damage at any time, regardless of the weather or presence of warning signs like swarms.

Spring is the swarming season for most subterranean termites.

Most species of subterranean termites swarm during the spring and summer months, typically on a warm day with calm winds after a rainfall.

Drywood termites and one particular species of subterranean termite (R. hageni) typically swarm during the late summer or fall months, from August through November.

There are several subterranean termite species and they don't all swarm at the same time. (On the other hand, dampwood and drywood termites typically swarm in the summer.) Species generally swarm based on favorable weather conditions. Varying conditions may mean that swarms will occur at different times. For example, some species prefer more moisture than others. Separation in swarm timing may be a matter of a few weeks, or time of day. 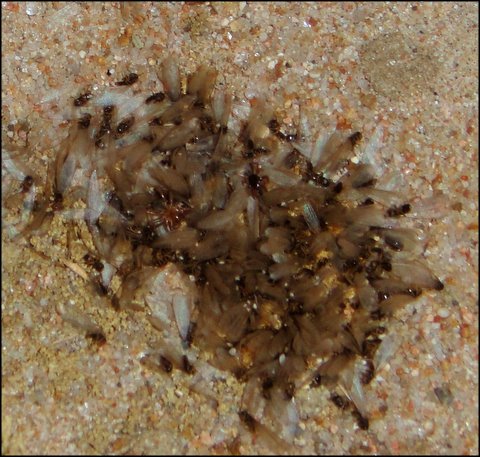 During summer, the activity inside a subterranean termite colony begins to settle down to the events of foraging and eating. Past is most of the frantic activity associated with releasing the swarmers – selecting the right days (after a rain, limited wind and optimal humidity), the best time of day, how many to “launch” at a time, and how many launches will be needed to get them all out.

Finished are the days (and nights) of soaking springtime rain. This moisture created all sorts of problems inside the colony, especially if parts of the colony were flooded. Seasonal conditions resulted in the death of many workers, and now the workforce is smaller. But the secondary queens kick in with plenty of egg production and the number of workers increases. The weather is also more predictable. The upper layer of soil is warm and moist, and there is plenty of food to be found.

Flight times for species vary based on favorable weather conditions, which means that not all termite reproductives swarm at the same time.

There is one termite species, light Southern subterranean termites (R. hageni), which prefers quite different weather conditions, opting to swarm in the fall. Swarms of this species may extend from August (cities along the eastern seaboard) to November (in the Deep South). The winged adults in this species are slightly smaller and pale brown, and often swarm during the same time of day as the spring swarmers (late morning). This species' size and color often gets it confused with ants that swarm at the same time of year.

When Does Termite Season Start?