Termites cause over $2 billion in damages each year. Subterranean termites cause 95 percent of all termite damage in North America. Colonies can contain up to 1 million members. 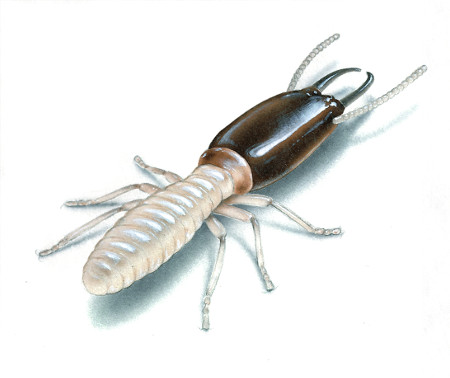 If you are trying to classify a specific termite colony into a group, you need to look at the soldiers and the alates, the winged, unmated reproductive caste, because worker termites across groups tend to look the same. Also important is the appearance of the damage wood they consume.

Identification factors for subterranean termites are:

How Did I Get Subterranean Termites?

These pests live in the soil beneath and around homes and often enter through wood that touches the ground or by constructing mud tubes from the ground to the wood they infest. Cracks in concrete walls and foundations made of hollow blocks are also paths these insects could take to infest a house.

How Serious Are Subterranean Termites?

As the most common type of termite nationwide, subterranean termites cause billions of dollars in structural damage each year. They also eat books, other paper products, cellulose-based products, and a variety of other plant-based goods.

Some colonies have more than one egg-laying female, so subterranean termite nests can grow quickly and contain hundreds and sometimes thousands of members. Since the pests can often infest homes for years undetected, responding to early warning signs is key to preventing serious damage. The most commonly observed warning signs are the presence of winged swarmers, mud tubes and evidence of damaged wood.

How Do I Get Rid of Subterranean Termites?

Continuous Treatment Plans
With Orkin, you receive the most dependable termite control from an industry leader. Our Continuous Protection Plans use scientifically proven treatments designed for your home’s construction type, and every one of those treatments is backed by a money-back guarantee. We’ve been around for more than 100 years, so you can be confident we’ll be here when you need us.

Customized treatment
Based on the layout of your home and the degree of termite infestation, Orkin will create a treatment plan tailored for your home.

Signs of a Subterranean Termite Infestation 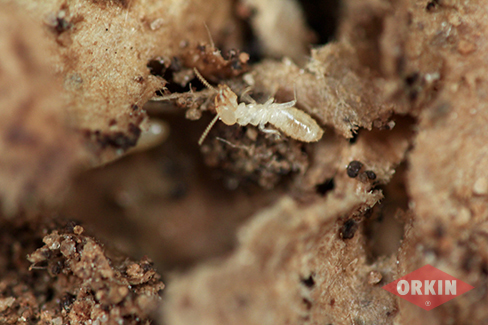 Winged, reproductive termites are frequently mistaken for flying ants, but are smaller than ants and have straight, rather than bent, antennae. Termite swarmers have four wings that are all the same size. Ant swarmers have two large wings in front and two smaller wings behind.

Where do they live?
Live in colonies underground, from which they build tunnels in search of food; able to reach food above the ground level by building mud tubes; dependent on moisture for survival.

What do they eat?
Diet consists of wood and other cellulose material.

Different rates of growth from egg stage to adult, depending on individual species; one primary queen per colony, which can lay tens of thousands of eggs in its lifetime, but eggs also can be laid by supplementary reproductives in an established colony.

If you are constructing a new home, especially in a high-risk area, it is advisable that you obtain estimates from reliable professionals for termite-proofing your home. Pest control professionals are best equipped to take preventive measures, which could save homeowners from severe loss. Pest control experts will also be able to make recommendations that can help to prevent termite infestation.

There are over 2,300 described species of termite living today. Many of them are found in tropical and subtropical regions such as deserts and rain forests. However, there are more than 50 species that have been found living in the United States. Collectively, they are responsible for an average of $1 billion per year in property damages, infesting 350,000 structures.

Subterranean vs Drywood
Alternatively, drywood termites make their nests within cellulose-based materials such as lumber, siding and wooden trim. They require no soil contact and get their moisture from the wood. They also attack floors, furniture and books. Drywood termites can be more difficult to detect and aren’t typically noticeable until small piles of pellets (their feces) collect.

Subterranean vs Dampwood
Dampwood termites locate their colonies in wood that is wet and even decaying. Wood that is in contact with the soil or wood that is constantly wet are ideal nesting sites for these termites. They are common in the Southwest and along the Pacific Coast. They are also found in Florida. If your home has leaky pipes or other moisture situations, it may be attractive to dampwood termites.

Subterranean termites are found throughout the United States, but are relatively scarce in the colder states. They occur in greater numbers in warm, southern states. However they exist in every state except Alaska. They are most common in the humid, subtropical south between Florida and Southern California.