Have been known to remove rubber insulation from telephone wires; sting is painful and can kill young wildlife. 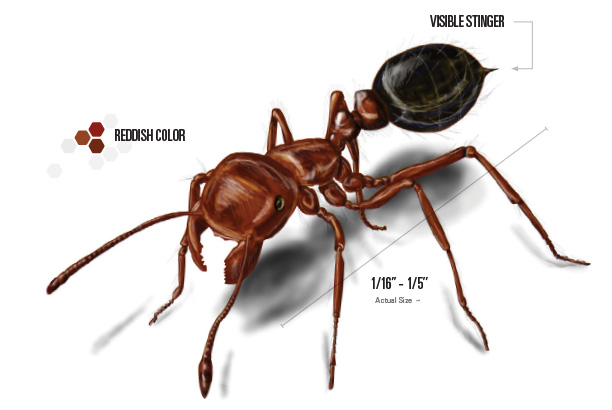 How Did I Get Fire Ants?

Fire ants favor warm, sunny conditions. They prefer dry fields and avoid shady areas such as woods. Typical mounds can grow up to 61 cm in diameter and 18 cm high. These colonies can contain several hundred thousand ants, including at least one queen.

Red imported fire ants may also move into yards as a result of infested nursery plants or grass sod being used in the home’s landscaping. Since red ant colonies often grow large enough to extend across several properties, control and prevention can be challenging.

How Serious Are Fire Ants?

When attacking, fire ants first use their mandibles to grip their prey, and then inject venom through a stinger. Fire ant stings are painful for most humans and fatal to some: if a victim experiences a severe reaction such as sweating, nausea or excessive itching, emergency medical services should be contacted immediately. Their sting, which includes alkaloid venom, is highly irritating to humans and results in red bumps and white pustules, which can ultimately lead to scarring. The sensation of a fire ant burn has been described as “stinging” and “intense burning,” and fire ants are known to attack potential threats or prey in large numbers. A fire ant colony may contain 100,000 to 500,000 insects, thus increasing the likelihood that multiple stings will be inflicted.

To avoid bites or stings outside the home, be cautious and observant where you step, sit or place items such as food or drinks. If you see a fire ant mound, keep an eye on the ground to watch for ant activity.

How Do I Get Rid of Fire Ants?

Fire ants are difficult to control for several reasons: the colonies are often very large and extend under the ground a great distance. Colonies often have multiple queens, so they can recover if a part of the colony and a queen or two have been killed, and they often occur in large numbers, so that when you have eliminated one colony another will likely move in to occupy the space.

Because fire ants can be sometimes a danger to humans and pets, it is a good idea to consult with professionals regarding ways to control them. Call your local Orkin Branch office to set up an inspection of your property. A highly trained Orkin Pest Specialist will come to your home and conduct a thorough inspection inside and outside. The Orkin Specialist will develop a customized treatment plan backed by science that best meets your needs.

One common sign of fire ant activity is the worker and swarmer ants. Other signs can be their sandy earthen mounds, which are usually more visible after recent rainfall, or the complaints of customers who are being stung by ants.

Typically nest in the ground. At times, nests may appear as visible mounds of 61 cm in diameter and about 18 cm high. Large colonies can have up to 250,000 workers. Very active and aggressive, they will sting any intruding animal repeatedly.

Fire ants are omnivorous. Known to eat meats, greasy and sweet materials. Fire ants are omnivores, meaning they will feed on animal or vegetable sources of food. The fire ant worker’s diet includes insects, earthworms, ticks, spiders, arthropod eggs, honeydew and other sweets. Plant sources of food include seeds. Young and newborn vertebrate animals eaten by fire ants include birds, rodents and calves. Generally, fire ants readily consume carrion (dead animals) regardless of whether the fire ants themselves caused the animal to die. Fire ant larvae are fed by the worker adults and eat only a liquid diet until their third larval instar is complete. Fourth instar larvae are capable of digesting solid foods.

Total time from egg to adult averages 30 days; workers may live up to 180 days; queens live two to six years.

Where did they come from?

Though not a native species in North America, the red imported fire ant has become a common nuisance throughout the southern United States, ranging from Florida to California and as far north as Oklahoma and Virginia. The red imported fire ant (Solenopsis invicta) was accidentally brought into the United States in the 1930s via a shipment of cargo. Initially transplanted into Alabama, they have spread and thrived throughout the southern states with the warm climate and lack of predators.

The most reliable method of fire ant treatment is to have your local pest control company perform an inspection and determine how to manage the fire ants in your home.