Having trouble with Fleas?

How To Identify & Control Fleas

More information on what fleas look like, or visit the flea image gallery.

How Did I Get Fleas?

Flea infestations often come from a pet dog or cat. The pests attach to the animal when it's outside, and then infest its fur and the places it sleeps indoors. Flea prevention for both the home and yard can be difficult. Without a proactive approach, any pet owner is vulnerable to an infestation.

Seek a host for blood

Fleas depend on a blood meal from a host to survive. On some occasions, fleas may become an inside problem when the host they previously fed on is no longer around. Then fleas focus their feeding activity on other hosts that reside inside the home. An example of such a situation is when a mouse inside the home is trapped and removed, the fleas that previously fed on the mouse are then forced to feed on pets or people.

How Serious Are Fleas?

Flea bites may leave the host with numerous swollen, itchy marks. They may cause allergic reactions in some people and can transmit several diseases. Furry pets are the most at risk. Fleas can bite people and pets and can be a big nuisance. According to a recent CDC statement, the number of illnesses caused by flea bites tripled between 2004 and 2016.

The most serious aspect of a flea infestation is often the time and effort it takes to remove. Dealing with the problem requires treating infected animals, cleaning flea-infested areas, and taking preventative measures to keep the fleas from returning.

How Can I Get Rid of Fleas?

Since the immature stages of fleas are very cryptic by nature, the first thing the homeowner should do is contact their pest control professional for assistance. Most of the time simply using over-the-counter products for controlling fleas will not resolve the root causes of the infestation.

An Orkin technician will conduct a thorough inspection and locate areas where the immature stages of the flea population are residing.

After completing the inspection, the next step is preparing the flea management plan. This plan will include:

Many signs can indicate flea activity:

Flea eggs that were deposited by the female adult, fall off your pets as they move, allowing them to be disbursed throughout the environment where a pet spends time.

Adults are parasites that draw blood from a host. Larvae feed on organic debris, particularly the feces of adult fleas, which contain undigested blood.

Fleas commonly prefer to feed on hairy animals such as: 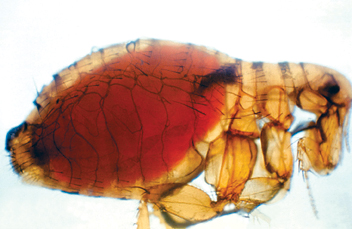 Yes, fleas can transmit diseases when taking a blood meal from a host or via contaminated fecal pellets. Read more about flea-borne diseases.

Eggs are not attached to the host. Eggs will hatch in the following places:

Most hatch within two days. Read more about the life cycle of fleas.

Employing exclusion practices is important for many pest problems, but exclusion does not have a major, direct benefit for flea control. However, sealing cracks, gaps and holes to help keep rodents or other potential hosts from gaining access into the home is an important indirect way to keep fleas outside.

The most effective ways to keep fleas from getting inside the home is to eliminate outdoor flea habitats and outdoor hosts, plus using area-wide flea control chemical products and veterinarian-approved flea control products on pets.

The cat flea is the most common flea in North America, although the dog, human and oriental rat fleas can also be found.