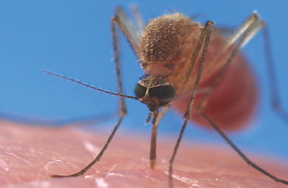 HOW IS MALARIA TRANSMITTED?

Human malaria is transmitted only by the bites of an infected female mosquito in the Anopheles mosquito genus.

WHAT TYPE OF MOSQUITOES TRANSMIT MALARIA?

Out of about 430 Anopheles mosquito species known around the world, roughly 30 or 40 are vectors (transmitters).

Anopheles mosquitoes are distributed throughout the world, except for Antarctica. Within the United States, Anopheles are widely distributed, but are most common in the warmer southern portions of the country.

The symptoms of malaria include:

Generally, symptoms start between 10 and 14 days after infection. Some cases begin as early as seven days later, while others can take up to a year to show.

IS MALARIA IN THE US?

Malaria occurs mostly in poor tropical and subtropical areas of the world; however about 1,500 U.S. cases of malaria are diagnosed every year, mostly in travelers returning to the country. While travelers may contract the disease in all regions known for malaria, individuals traveling to sub-Saharan Africa run an increased risk for contracting and dying from the disease.

United States malaria outbreaks are practically non-existent. However, a growing number of competent vectors found in southern states threatens the re-emergence of malaria in the U.S.

Contracting malaria from blood transfusions continues as a severe complication in blood recipients. Fortunately, only about one case of transfusion-transmitted malaria is reported biennially in the U.S.

Preventing malaria is best accomplished by mosquito control, use of both skin and clothing insect repellents, wearing long-sleeve shirts, long pants and shoes and using pre-exposure antimalarial drugs when traveling to parts of the world where malaria is a risk.