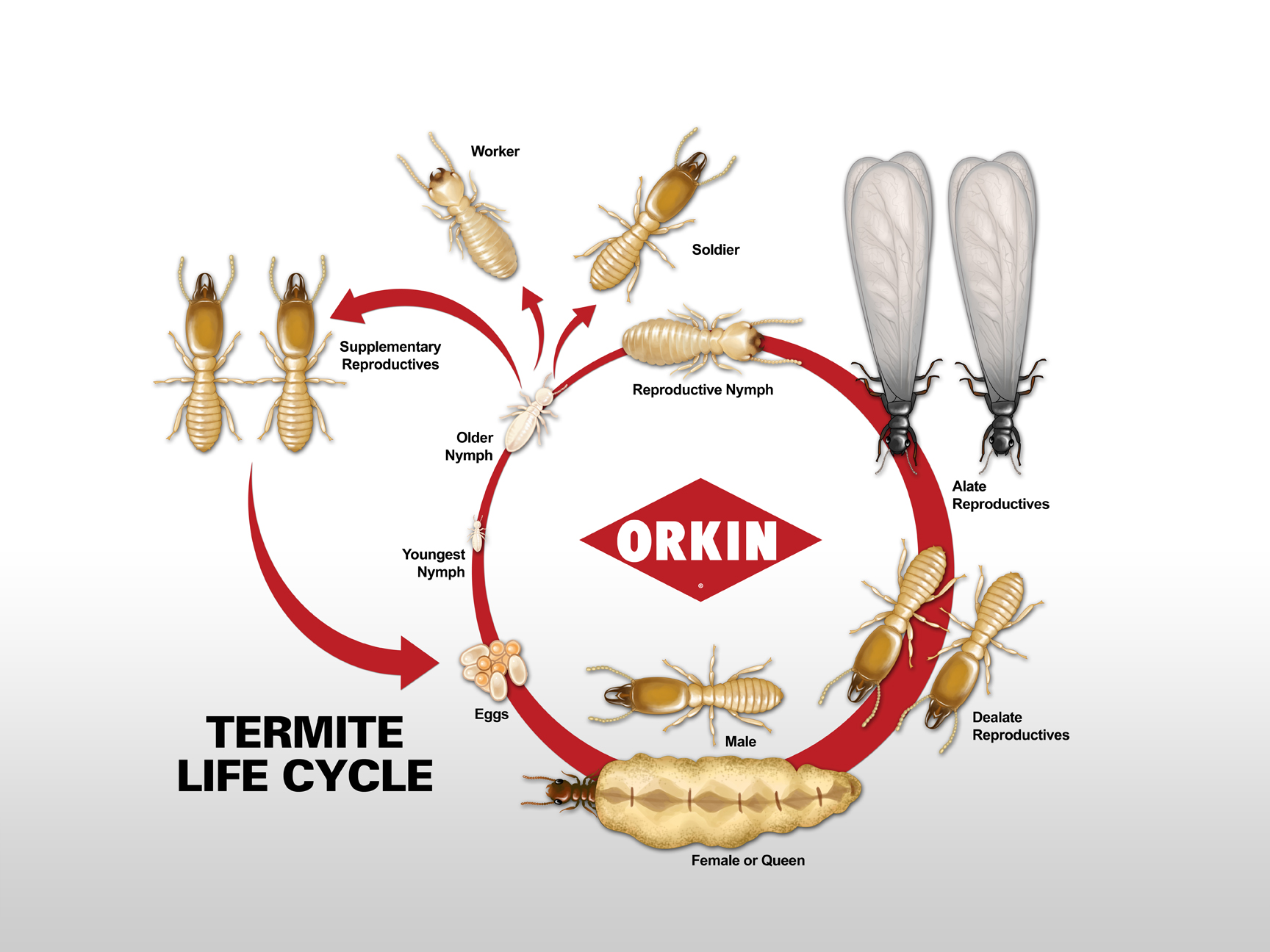 Reproduction
The life cycle of the termite begins with a mating flight, wherein swarming winged reproductive males and females leave established colonies and procreate. After fertilization, winged termites land and shed their wings, going on to form new colonies. These insects then become the king or queen termites of their newly established colonies. The queen and king termites are at the center of the termite life cycle and are responsible for reproduction.

Eggs
After the fertilized queen lays her eggs, they hatch into pale white larvae. Eggs hatch into larvae and molt to develop into workers, soldiers, and primary or secondary reproductives.

Nymphs
A nymph is a young termite that is going through molts, a process of shedding its exoskeleton, to become a reproductive. First, a termite develops a soft exoskeleton under its current, hard exoskeleton. Then, once the termite has reached maturity, its outermost skeleton splits open, and the new exoskeleton enlarges and hardens. This molting process continues throughout a termite’s life cycle based on the colony’s needs.

Larvae
Over the course of several molts, these larvae grow to assume a role in one of the three termite colony castes: workers, soldiers, and reproductive termites, also known as alates. 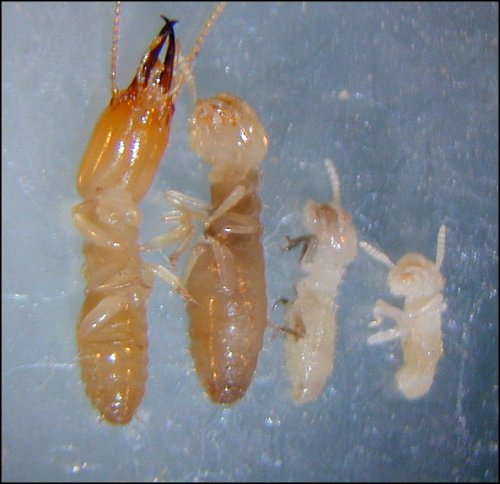 Each caste has a distinctly different physical appearance. Workers are responsible for constructing tunnels and chambers as well as feeding and grooming other termite castes. Soldier termites are yellow-brown in color, with dramatically enlarged heads and often large mandibles. These are useful in combat, but render warriors incapable of feeding themselves. The reproductive alates are darker in color and are born with two pairs of wings.

Although it is not clear how larvae are relegated to a certain caste, some research has indicated that maturity and the overall needs of the colony may dictate caste assignment. In fact, research has shown that castes in the termite life cycle are not rigidly set, as termites belonging to one caste may develop into another caste if the colony requires it. Thus, a soldier termite may become a worker or a reproductive termite if the colony experiences a shortage of one or the other.

Workers and soldiers live approximately one to two years. Queen termites may survive for over a decade under optimal climate conditions.

Encounters
Generally the life cycle stages most likely encountered by homeowners are termite workers as they tunnel through wood and the primary reproductive termites that show up as swarms. The pests often are not observed until someone discovers either wood that is damaged or dead termite bodies and shed wings that are indicative of a reproductive swarm.

The remains of termite swarms are usually seen near a source of light such as a window, entrance door, or patio door. Swarms generally occur in the spring, especially after a rain.

As a general rule of thumb whenever a termite swarm is observed, that means the colony has been actively consuming wood in the house for about 3 to 5 years. If dealing with a subterranean termite colony, the most damaging of the three main groups of termites, the presence of other colony caste members are concealed and hidden below ground.

Concerns
Damage is the most significant concern homeowners have with termite infestations. Termite workers may consume and damage wooden structures and wooden surfaces such as floors and wall coverings (paneling or sheetrock.) Some species may damage standing trees or construction wood located in the attic or other locations where wood is dry. Contacting your local pest management professional and requesting an inspection and termite protection plan can lessen these concerns.